The End of The Line (Edited by Jon Oliver) 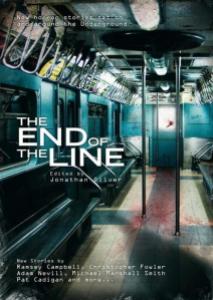 There’s a certain sense of unease and trepidation that waiting for the last tube home can bring. The lack of light, the rats scavenging underneath the tracks, the strange silence, the absence of a phone signal disconnecting you from others, and the dark thought in the back of your mind as the platform tremors and the echoed roar is heard in the distance that says, “what if that’s not a train?” Couple this with the claustrophobia, distrust, and paranoia of a crowded tube, and you would be forgiven for assuming that the underground is as synonymous with horror as the haunted house, crypt, or asylum. In his forward Jonathan Oliver expresses his surprise at the lack of Underground based horror stories and presents us The End of The Line, a collection that single-handedly attempts to readdress the balance. Fortunately this attempt is a hugely successful one, for what we have at hand is a collection that reads like a best of horror, featuring upcoming and veteran writers. Whilst there are tropes that crop up throughout the near 400 pages, each tale is told with a freshness and unique spin that leads to satisfaction almost every time.

Bullroarer opens the collection on an appropriately sombre note, a tale of revenge, childhood trauma, adultery, and sexuality. Meloy’s fallen protagonist has been left by his wife, he resorts to a quick shag that’s “like trying to hang a manatee on a coat hook” whilst his wife enjoys the pleasures of her muscular Greek art tutor. The attraction to this tale is in equal parts Meloy’s honed ability to create a story seducing the reader with rich imagery as it is the self-discovery and subsequent sinister plot twist.

After reading The Girl in the Glass I could not sleep at night without seeing her staring back at me, this was weeks ago and sometimes she still haunts me. This alone is endorsement enough that this ghost yarn is a triumphant success. Probert delivers a ghost story that captivates from the initial lines and haunts you as vividly as the tragic girl who plagues Dr Tom Newfield. This inventive story depicts an underground charge that many of us are unaware of, but as soon as you’re asked to cough up, you better hope that you manage to meet the cost, lest you suffer the ultimate penalty. In a generation where so much emphasis is placed on violence, gore, and pushing horror to the limits, Probert reminds us that sometimes a ghost can send far more shivers down your spine than a bucket of blood.

The penalty theme is investigated once again in Simon Bestwick’s The Sons of the City, a tale revolving around a hidden Manchester underground system and an ancient pact.

Yet it’s not just ghosts that pack a greater punch than the torture-porn generation has become accustomed to. Gary McMahon’s Diving Deep crafts a tale of terror, with a distinctly Lovecratfian tone, as the reader must venture into a hidden underwater tunnel system deep in Antarctica. As readers find themselves sucked into a hellish journey, that was only ever intended for and could only ever have been made by our protagonist, readers are advised to take extreme caution for indulging in this may lead to a terrifying journey of your own. Psychological trauma and self discovery is far more harrowing than the biggest, most grotesque, external fear. If you can’t see it, how can you be certain you’ve escaped? Diving Deep is a richly layered story that requires thought and consideration from the reader. It’s a tale that to be fully appreciated requires a certain depth of understanding and work from the reader. If you prefer horror that’s spelt out for you then you may not get on with this, but if you enjoy a masochistic buzz through working for your fear then dive deep and hope you can swim back.

Whilst McMahon has carefully cultivated his own underwater system, Jasper Bark provides a more Sci-fi take on the theme with a Twilight Zone vibe in what is unquestionably one of the standout stories in the collection, End of the Line. “He woke on the platform in a pool of blood” really catches your attention as an opening line, and fortunately Bark’s obscure tube system with stops such as ‘CHRONONAUT’S FIRST EXCURSION’ and ‘POLICE VISIT’ is enough to keep you hooked until the intestine spilling end. End of the Line has more twists and turns than the most vomit churning rollercoaster imaginable, just as you think you have this one figured out Bark zaps you with more questions. End of the Line suggests there is a rich future ahead for Jasper Bark. Word to the wise: if you wake up on a platform in a pool of blood go back to sleep.

Nicholas Royle doesn’t go for the same overtly horror hit as other stories in the collection, but rather weaves a psychological creepy tale. The further one travels with The Lure, the more abstract and surreal the journey becomes. There are many incredibly unnerving highlights, one is sure to feel discomfort when encountering the blind man with a rubber eye mask and painted on eyes. Yet as disturbing as this is, it is equally charming and authentic – based in the Paris métro with snippets of French interwoven. Although perplexing initially, it is worth persevering, the pieces of the puzzle fit perfectly upon completion.

After travelling on a train that shouldn’t exist, Adam enters a world of hatred in Rebecca Levene’s 23:45 Morden (via Bank). His troubles begin as he sleeps through his alarm clock, intensifying as his office job is turned upside down courtesy of a sexual assault charge. Problems escalate as his neighbour becomes a dab hand with a hammer and his potatoes are sprinkled in caustic soda. Adam has entered a world of hostility, aggression, and unapologetic malice. This is as engaging as it is terrifying.

The notoriously bad transport system in the UK has created a complaint culture. Al Ewing dares to imagine a shiny, new, Tube system where nobody so much as frowns in The Roses That Bloom Underground. The lack of engineering works, rush hour crowds, and rats under the tracks arouse Dexter’s suspicion. The dark revelation may clog your nostrils and throat. Ewing reminds us that more often than not if it looks too good to be true, it is.

Child abduction, murder, and claustrophobia are all present in Mark Morris’ Fallen Boys. This highlight of the collection initially appears to be little more than a good old fashioned ghost story. As the tale progresses it is apparent that the threat is much closer than imagined.

We live in a society obsessed with CCTV and reality television. Perhaps the most powerful tale of all is Stephen Volk’s In the Colosseum. A group of rich voyeuristic pleasure seekers base themselves inside the CCTV room of Oxford Circus Underground and watch the brutality unfold. As they enjoy stabbing, sexual assault, and extreme violence onscreen, they indulge in a cocktail of sex, coke, and champagne within the surveillance room. The horror’s hit hard and impact similarly to the film Eden Lake, albeit packing a greater punch. As we become further obsessed with reality television and degrading behaviour Volk asks us to consider just how far we’re prepared to take it. Similarly, Ramsey Campbell latches onto our other obsession, the threat of terrorism and the fear that an abandoned briefcase can evoke in The Rounds.

When Jonathan Oliver wrote “Natasha Rhodes is pretty fuckin’ metal” she had a lot to live up to with Crazy Train. Fortunately she didn’t disappoint, delivering a tale that’s nostalgic, eerie and fun. The spirit of metal is alive, a little too alive…

The End of The Line is well worth dipping into, boasting a plethora of original, humorous, and horrific tales. Whilst I have been unable to detail the entire magnificence of the roster on show, The End of The Line comes fully recommended. This collection contains stories that will terrify you with vivid realism, as in Lovegrove’s Siding 13 and cautionary Christmas tale Marshall Smith’s Missed Connection, move you as in Fowler’s Down and Cadigan’s Funny Things, deliver more than a healthy dose of spiritual eeriness as with Nevill’s On All London Underground Lines and Williams’ Exit Sounds and bring you face to face with loss as in All Dead Years by Joel Lane. Some may argue that The End of The Line is not consistently terrifying throughout and falls somewhat short as a horror anthology. Unfortunately they would be missing the point. Both horror and The End of The Line can offer more than jump out of your seat shocks, read this and prepare for enlightenment.

Permanent link to this article: https://www.thisishorror.co.uk/read-horror/book-reviews/the-end-of-the-line-edited-by-jon-oliver/