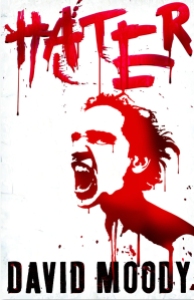 If you’re a fan of apocalyptic horror it’s impossible to ignore the excellence and subsequent success of David Moody. The last few years have given rise to an explosion of Moody mania as his novels, previously available via internet download, have made their way into print. Hater takes the successful zombie format, dissects it, modifies it, re-arranges it and puts it back together with the omission of zombies. It’s a bold, brave title that’s well worth your time and money. Hater isn’t for readers that derive enjoyment through intricate detailing of rooms, characters and scenery. David Moody isn’t that kind of writer. On the contrary, Moody delivers a high action, end of the world vision that cuts to the point with more devastation than a blade to the carotid artery. Fortunately he doesn’t compromise on character development either.

Hater follows an ordinary guy, Danny McCoyne, married with three kids. McCoyne’s stuck in a dead end job with patronising co-workers and a rucksack of resentment for both colleagues and career. On what was otherwise an unremarkable Thursday morning he witnesses a regular guy storm over to an eighty year old woman and hit her with a sea of white scorching fury, whilst thoroughly terrified. Suffice to say, this powerful prologue immediately arouses the reader’s interest. It is soon revealed that this apparently unprovoked attack is not an isolated incident. Other attacks are unveiled, best friends as close as sisters turn against one another with an absence of remorse, children attack their own Mothers and previously inseparable couples find their ties severed fatally. As the killings progress, those alive try to brush the violence off as sensationalist hype, disturbed by the carnal carnage. Whilst zombies are physically identifiable, there are no symptomatic signs of infection for Haters. Haters appear as inconspicuous as anybody else, yet they have a necessity to kill. This unnerved society parodies our own fears of terrorism. We live in an anxious world, considering whether our fellow passengers, colleagues and neighbours could be terrorists. This constant uncertainty and mistrustful society is played out to its full devastating effect as the ultimate Us VS Them scenario unfolds.

As the tension heightens and the paranoia becomes tantamount to a bomb on a plane, families and friends become more apprehensive. This culture built on fear leaves nobody safe from suspicion. Those who fear the Haters most deny their existence. This forces the reader to consider at what point they would confront the reality of Haters. Would you deny the reality as hate spreads to your town, your street, your apartment block and finally your home? As the threat ebbs closer towards McCoyne, each page turn is filled with a tinge of trepidation and excitement as one considers the most significant question of all: when will the infection directly enter McCoyne’s life, and what are the repercussions?

Authorities add to the war-like scenario imposing a night-time curfew and a requirement to carry ID at all times. This feeds fuel to the Us VS Them mentality and soon extreme anti-Hater groups are born. Anti-Haters hunt down and kill Haters. This adds to the panic as individuals fear losing their temper and the consequential misdiagnoses as Haters. This spawns a brutal world where a step in the wrong direction could be terminal.

The characters on offer are both believable and well developed. The mutual resentment between McCoyne and his father-in-law mirrors the conflict between Haters and the unaffected. Just as some choose to mask and gloss over the chaos, McCoyne does his best to conceal the animosity between himself and Harry whilst with his family. Once again, the reader must consider whether he does this to keep a harmonious, perfect family together in a crumbling society, or for self-preservation.

Moody finishes Hater with a cliff-hanger that will impel many to rush out and purchase the follow up, Dog Blood. Moody’s fast paced book leaves no time to pause, he is the Quentin Tarantino of writers making every moment count. David Moody is as imaginative as Barker, as compulsory as King and as addictive as Palahniuk. This is a bloody good read – read it now!

Permanent link to this article: https://www.thisishorror.co.uk/read-horror/book-reviews/hater-by-david-moody/