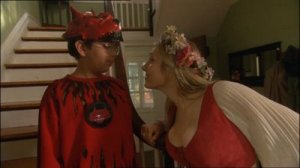 Satan’s Little Helper is a strange beast – an easy to watch black comedy that is morally ambiguous. It is based around the exploits of Dougie (Brickel), a young boy who is addicted to a video game – Satan’s Little Helper – in which the player is the devil’s assistant in a killing spree through suburbia.

When his older sister Jenna (Winnick) comes home for Halloween, Dougie looks forward to going trick or treating with her. His plans are scuppered, however, when Jenna brings home her new boyfriend, Alex (Graham). Throwing a tantrum, Dougie storms out of the house and witnesses someone in a Halloween Satan costume clearing up a murder scene after committing the act. Convinced that the dead man was just a prop and that the costumed killer is, in fact, the Lord of Darkness, Dougie proceeds to ask if he can help him. Dougie then unwittingly tags along on a real killing spree and ropes his new ‘master’ into trying to kill Alex. Cases of mistaken identity and the prerequisite lack of common sense with some characters ensue, which help the body count rise. Only at the end do Dougie, his sister and mother (Plummer) realise exactly what is going on, by which time the majority of the town’s population is either dead or looting.

The movie is a low budget effort, but makes good use of its resources. The gore quotient is okay and the death scenes are not over elaborate. The humour is underplayed well and there is one specifically cringe-worthy moment in a supermarket car park which involves a trolley, a pregnant woman, another woman with a pram and a blind man. It would be fair to say that this scene almost spoofs Death Race 2000.

Being set at Halloween, there are some surreal moments due to the costumes on show. The costumes look cheap and tacky, but I found that to be part of the attraction, as real life costumes are usually ill-fitting and cheap looking. There is also a subtle homage to John Carpenter when a familiar tinkling of the ivories can be heard on the soundtrack. There are concerns over what message the film is trying to convey – at times it appears lost. Is it a statement about the next generation and their lack of religious beliefs? Is there a social commentary about the desensitisation of children playing violent and gory computer games that they shouldn’t even have access to? Is there a commentary about single parent families and the lack of father figures in so many of them? There may even be a minor observation about incest, with Dougie wanting to grow up and marry his sister, and woe betide anyone who stands in the way of his dream. Then again, maybe none of these messages are deliberate, but they exist.

It is not the best low budget horror film in recent times, but it is by no means the worst either. It is difficult to rate it against the ubiquitous Halloween or even the criminally overlooked Trick ‘r Treat [Editor – Trick ‘r Treat is best buried, a generic, unsatisfying film…]. However, it is worth a viewing if only to see a character who is supposedly Satan flipping people off or giving a big thumbs up.

A fun, if flawed, movie.

Permanent link to this article: https://www.thisishorror.co.uk/see-horror/film-reviews/satans-little-helper-2004/