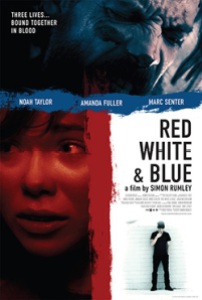 Simon Rumley’s latest feature is a tricky and troubling beast. It’s also one of the most memorable DVD releases of the year. Ostensibly Red, White & Blue takes on your typical revenge scenario beloved of so many violent, exploitative B-Movies and twists this familiar trope until it snaps. The film’s been called a ‘slacker revenge movie’, and that phrase sums up best how it works. There’s certainly a lot more going on than a simplistic plot and graphic bloodshed.

Noah Taylor plays Nate, a Texan ex-soldier who’s suffering from post-traumatic stress disorder. He’s returned from Iraq with an honourable discharge and some serious attachment issues. While staying in a crummy boarding house, he meets the promiscuous Erica (Amanda Fuller), who seems to be drifting from one sleazy sexual encounter to another in the hope of outrunning her own demons. Nate is the only man she meets who doesn’t want to drag her to bed, and slowly these two fractured souls form a bond of friendship.

One of Erica’s ex bed-partners, a small time rock singer called Franki (Marc Senter) turns up with some bad news, and the way each of these three characters react to the aftermath of his disturbing revelation provides the meat of the story. It would be unfair to give too much away about the specifics, because to do so would ruin what is a very dark, uncomfortable, and often maddeningly melodramatic ride. This is a film that’s best served cold; it hits harder if you don’t really know what to expect.

The characterisation in the film is first-rate, particularly that of Erica – there’s some Oscar-worthy work by Fuller here; she gives us just enough to care about in the damaged Erica that we give a damn about her plight, even if we stop short of actually liking the woman. Noah Taylor is also excellent as a mentally broken combat veteran who is self-aware enough to warn everyone – including the audience – that he’s probably psychotic. This doesn’t stop Erica from drawing closer to him, nor does it prevent viewers from adopting him as the main sympathetic protagonist. And this is perhaps the film’s most troubling aspect: the only character we really sympathise with is a violent sociopath who has already warned us that he will crack and hurt someone before the film is over.

This is where the brilliance of Rumley’s bleak and blistering screenplay lies. Not in the slow, meandering pacing or the sly combination of arthouse sensibilities with grindhouse gore, but in the way that it makes us root for Nate despite what we already know – and what else we gradually begin to suspect – about him.

The film’s ending is breathtaking. People have said that they were unable to watch because of the intensity of the final fifteen minutes. You might not look away – hopefully you’ll be too invested in the story and the characters to do so – but you will certainly watch events unfold with a kind of sick fascination as the depth of Noah’s psychosis is fully revealed.

Permanent link to this article: https://www.thisishorror.co.uk/see-horror/film-reviews/red-white-blue-2010/