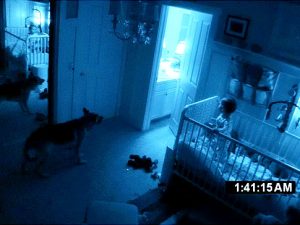 The curse of the difficult and somewhat awkward sequel is evident in the follow up to the critically acclaimed box office success Paranormal Activity. We are, once again, plunged into the distressing realms of demonic activity, amongst the otherwise blissful world of American suburbia. What follows is a rather cumbersome attempt to explain the events of the first film, quashing the rather juicy mystery that made it so wholly enjoyable.

The film, opening with an extension of thanks to the ‘families of the deceased’, is set three months before the untimely and horrific demise of Micah (Sloat). It follows the lives of Katie’s sister Kristi (Grayden) and her family, starting with her return home with newly born son Hunter. Staying true to the original format, it is presented as ‘found footage’, with the added element of CCTV. ‘Found footage’ horror has spiked in popularity since the success of The Blair Witch Project and in more recent years REC. Typical to the genre, the footage is presented in such a way that it adds to the air of atmosphere by insinuating it is genuine. Paranormal Activity 2 documents a series of unpleasant bumps in the night, the family’s knee-jerk reactions and an excruciatingly large amount of atmosphere-building silence accompanied by endearing filler-footage.

Comparisons between the first and second film are easily drawn, despite the increase of budget from a meagre $15,000 to a cool $3,000,000. The effective cloning detracts from the impact that made the first film so palm-squelchingly effective. Horror films, especially those of the psychological persuasion, can be measured by the physical effect they have on the viewer. Whilst the first film guarantees sleepless nights, the near-identical nature detracts from the successor’s impact and lessens the insomnia-inducing value.

Despite the unnecessary and cheapening nature of the sequel it has its moments. One scene in particular commands the entire auditorium to leap out of their seats in the hysterics that made the first film such a credible horror. Williams possesses the ability to wind the atmosphere to breaking point in the lead up to a popcorn spilling moment, as well as spring surprises on the audience without any warning to grip buckets that bit tighter. Likewise, as the camera switches to night-vision, audience palpitations increase.

Paranormal Activity 2 contains the same thrills, chills and popcorn spills of its predecessor but the overbearing similarities to the first and its clumsy attempt to tie it up with a nice little blood-soaked bow are completely unnecessary and drain the unique experience of the first. Avoid or forget this and remember only the terror that the first film inflicted upon us.

Permanent link to this article: https://www.thisishorror.co.uk/see-horror/film-reviews/paranormal-activity-2-2010/