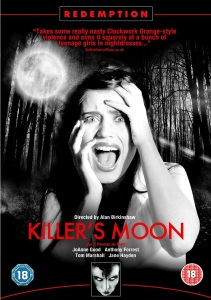 Recently re-released, eighties exploitation horror, Killer’s Moon compares itself to both A Clockwork Orange and I Spit on Your Grave, setting the bar high from the offset. However the cover blurb also refers to ‘four drugged-up mad man‘ so it’s difficult to take seriously. Whether it’s the ambitious comparisons, the tasteless sexism, the poor acting or the inconsistent tone, Killer’s Moon has not stood the test of time. Given the relative brilliance of similar era films, Maniac, The Shining, The Omen et al, one has to seriously consider whether this was ever worth watching or if its cult status stems from a combination of laughs and outrage as per Troll 2 and The Room.

When four escaped psychopaths, wired on a cocktail of dream therapy and LSD, collide with a class of stranded teenage girls, the outcome is predictably messy. Initially this video nasty is frustrating as the promised brutality and violence is confused with comedy through off-hand remarks and ludicrous acting. The first indication that a killer is on the loose comes in the form of a three legged dog making itself known to Peter (Forrest) who simply remarks, “that cut’s too clean for a trap.” In the bonus interview with director, Alan Birkinshaw, he admits that this dog proved useful as it had been awarded the Victoria Cross award for bravery as it lost its leg in a shotgun blast whilst intercepting armed robbery. Birkinshaw candidly confesses this gave Killer’s Moon much sought after publicity in national newspapers.

This shock-slasher is little more than four men pursuing, raping and brutalising teenage schoolgirls, whilst believing they’re dreaming. The dream idea is rammed in viewer’s faces again and again as the killer’s repeatedly remark ‘this is only a dream’. This condescending approach does the film no favours. There is a measure of pleasure to be had in Killer’s Moon if it is taken as a wholly inappropriate eighties comedy. Indeed the caricatured clichés are much more likely to find themselves at home in Fawlty Towers(admittedly a seventies comedy) than Cannibal Holocaust. Yet despite nervous laughs at ‘Of course it’s a dream. And stuffed full of jailbait’ and guffaws at ‘You mean this criminal lunatic is walking around believing he is in a dream? In my dreams, I murder freely, pillage, loot and rape’ one can’t help but feel uncomfortable at some of the more sexist comments. Whilst it’s no secret that the slasher genre treats women as little more than sex objects, when one girl consoles another with ‘Look, you were only raped, as long as you don’t tell anyone about it you’ll be alright’ it is apparent that Killer’s Moon has gone a step too far.

It’s a sad reality that Killer’s Moon was never intended as a comedy, this much is evident when listening to interviews with both Birkinshaw and Joanne Good. Perhaps, most telling is that Birkinshaw’s previous film,Confessions of a Sex Maniac was initially entitled The Tit.

If you’re looking for laughs you’ll find them here, but ultimately they’re stifled and unrewarding. For an example of a well executed video nasty look to The Last House on the Left or opt for the recently remade I Spit on Your Grave. If it’s laughs you’re after indulge in Curb Your Enthusiasm or Super Bad. As for bad acting, try The Room, at least it’s a little more tasteful.

Permanent link to this article: https://www.thisishorror.co.uk/see-horror/film-reviews/killers-moon-1982/