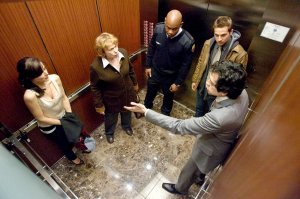 After setting the bench high with films such as The Sixth Sense and Unbreakable, M Night Shyamalan has regrettably directed a string of subpar films in recent years. As a result, any film associated with him is treated with caution and a healthy dose of scepticism. On this occasion Shyamalan has provided the basic story and premise with Brian Nelson taking over screenplay duties whilst the Dowdle brothers are responsible for directing.

Devil is the first film in Shyamalan’s The Night Chronicles trilogy – a series of films exploring the supernatural within modern society. Devil clocks in at just eighty minutes long and is predominantly set in an elevator. The premise is a simple one – five strangers are stuck in an elevator, every so often the lights go out, a clunk and scrambling is heard and when the lights return one of the strangers has died a rather colourful death. As its namesake would suggest the implication is that one of the strangers is the Devil. This sets up a cluedo style who-done-it mystery from the start which should theoretically keep the audience guessing as the film progresses. As has become synonymous with Shyamalan films there are a few plot twists but they are more subtle than the completely film altering twists we have seen in previous offerings like The Sixth Sense.

Catholic security guard Ramirez (Vargas) serves as the narrator recollecting an old Devil story that his grandmother told him to ensure he behaved. Ramirez is convinced that his grandmother’s story is coming to life within the building as a suicide is committed early on – creating an opportunity for the Devil to enter the building. Ramirez will not contemplate any of the other theories that are offered, his fellow security guard Lustig (Craven), in hilarious fashion, apologetically tells Detective Bowden (Messina) that Ramirez is just being hysterical as he’s religious.

The premise of Devil is a reasonable one and it really did have the potential to be up there with some of the best horror films out this year. However there are quite a few flaws that detract from the overall enjoyment. Firstly Ramirez’ narrating becomes boring extremely fast. The audience has no option but to go along with his version of events with no scope for alternative theories – despite a few poor attempts to temporarily mislead viewers. Ultimately Ramirez tells the viewer exactly what will happen minutes before it happens, essentially spoon feeding us the story. Whilst this device was recently used in the video game Alan Wake to evoke a genuine sense of trepidation it works to Devil’s detriment as the audience feel patronised.

Notwithstanding the elevator setting, half an hour of the film focuses on the events occurring beyond the elevator. Whilst it’s understandable that the Dowdle brothers wanted the viewers to visualise the rescue mission occurring outside it really detracts from the claustrophobic environment that should have been captured. In fact the only time when claustrophobia is touched on is at the start of the film when one of the stranded, security guard Ben (Woodbine), confesses that he is claustrophobic.

Despite being entertaining, in part due to Messina’s excellent performance as Detective Bowden, it’s difficult not to go away from Devil feeling a little short changed. Devil provided the perfect premise for divulging the fears of trapped strangers and exploring the social dynamics between the stranded. It had the potential to uncover the very core of isolation and dread, yet here we are barely even scratching at the surface with generic characters that are more concerned with deducing who the killer is than revealing any real sense of identity. Unfortunately, the lack of deep exploration means that the audience are left trying to guess who the killer is but caring little about who will meet their demise next. The characters aren’t given enough life for you to empathise or quite frankly give two shits about them. One cannot help but feel that everything wraps up too nicely, there are no questions at the end, there’s a religious undertone throughout and the moral message seems to be – hey, don’t worry if there’s a Devil, there’s a God too so as long as you’re a good person you’ll be ok. This is a horror film for the non-horror fan – everything seems far too fluffy and ideal for horror. Let’s hope that the second film is a little more  morbid and there are at least a few loose ends left.

Permanent link to this article: https://www.thisishorror.co.uk/see-horror/film-reviews/devil-2010/