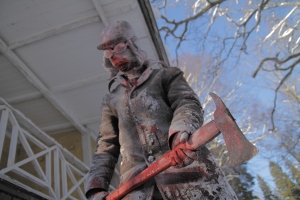 Following some success in her singing career, Winona (Oldenburg) decides to return to her hometown [Stockholm] to re-charge her batteries. Driving to a bar in town, as she feels so lonely in the creepy house her manager (Beck) has rented for her, she meets up with her ex-boyfriend Richard (Saxe) and his friends Carl (Rylander) and Liz (Hugoson). They go back to her place and pair off for the night, but there’s something else in the house with them…

This is an odd little film. The actors, all native Swedes (as we discover on the making of), adopt US accents that occasionally slip from scene to scene and make this feel like a film out of place. The locations, heavily snowbound, are utilised well to aid the sense of isolation but nothing seems to hang right because you know it’s not in the US; made clear by the architecture and the occasional mangled vowel.

It looks good – although the film has that cold, harsh DV look to it – the shots are nicely framed and there’s very little shaky-cam. The cast try their best but, apart from Ms Oldenburg, none of them really carry off their parts. The direction is plodding, often mistaking ‘time-filler’ for suspense, whilst the visual effects – mostly digital, but a few are old-school prosthetics – are generally very good.

The chief baddie adds to the oddness. He’s clearly been marked out by the film-makers and distributors as something of an icon – he’s very prominent on the cover art, which otherwise appears to have nothing else to do with the film – but we get none of his backstory at all, so he remains a mystery. He seems to live around the house somewhere (there is a hint, late in the film, that Winona has gone to the wrong house, which means that all four are trespassing on his land and, whilst it’s a bit of an extreme way to deal with intruders, you could argue he has a point), but he also uses a huge mine that’s underneath the house. Said mine is never mentioned again, yet it’s lit and there are signs of life. Worse, it appears that the film-makers haven’t decided on what exactly the killer is supposed to be. He takes an axe to the back and a chisel to the throat and gets up. He gets shot, hit and pushed downstairs, but gets straight back up again. Is he supernatural? Is he wearing armour? He wanders around in an overcoat, with his head swathed in bloody bandages and huge aviator shades (a great look, it has to be said), but he exists purely to menace the cast and so, very quickly, loses any sense of terror. The pacing does not help – it’s far too slow for this kind of genre outing. Winona spends the first ten to fifteen minutes of the film getting to the house, going to the bar and bringing her friends back. None of them is a sparkling wit, so the dialogue falls flat whilst we’re waiting for the killer to appear. Then he does and disappears again for a while. The only time the speed really picks up is in the frenzied climax, which is welcome but demonstrates how slow the rest of the piece is. For a seventy-four minute film, it feels slightly obnoxious to be saying that it could clearly be a good fifteen to twenty minutes shorter but it would work better as an overlong short.

However, there’s a massive “but…” to all of this, this was purportedly made on a budget of $5,000 and filmed entirely on a Canon 7D Digital SLR (the latter fact backed up by the making of) and so the film deserves an extra point just for putting together a professional looking production. It could still be a lot quicker and leaner but even so, hats off to the film-makers.

It’s difficult to know who would go for this, but it can be recommended as an example of very low-budget film-making.

Permanent link to this article: https://www.thisishorror.co.uk/see-horror/film-reviews/blood-runs-cold-2011/