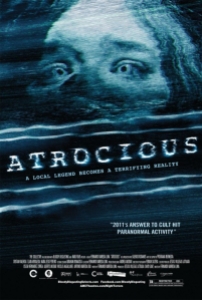 Found footage horror films are ten-a-penny these days. Since The Blair Witch Project did so well at the box office, over a decade ago, it has been a cost effective plot device that is constantly reused to belie a meagre budget.

Atrocious is not the first Spanish horror film to utilise this camera technique, with [REC] being the most famous and successful example to come out of the country, and it undoubtedly won’t be the last either. The secret to success lies in whether it can offer something new, either via scares, story development or minimal effects. Atrocious is an easy production to compare to the 1999 phenomenon, in that it concentrates on an urban legend and situates a lot of its events in a wooded area.

A family spends a vacation at an isolated property that has been unused for ten years and is right next to its own overgrown labyrinth. The eldest son, Christan (Valencia), and daughter, July (Moraleda), investigate urban legends with their video cameras. Fortunately for them, according to local folklore, a young girl called Melinda got lost and fell down a well. Now, if anyone gets lost in the labyrinth and they find Melinda, she will show them the way. The ending is advertised on the packaging, so you know that the family are destined to die – the only question is, will their demise be original enough to keep your attention?

The movie starts slowly with tours of the house and gardens before the protagonists enter the labyrinth itself. It is unkempt and easy to get lost in, and the father warns them not to go in there, but in life as well as horror films, if you tell a child not to do something, it’s a dare. The film then descends into the usual fare of noises that pique the interest of the main characters and the usage of night vision to highlight that, once inside the labyrinth, the characters cannot see two feet in front of them. Atrocious then breaks what is considered to be one of the golden rules in films, although which one won’t be spoilt for you. This acts as the catalyst for the final thirty minutes of mayhem, although mayhem seems to have been misconstrued as overuse of the night vision whilst running around in a bid to create dread. Whereas this can be an excellent idea sometimes, in Atrocious it genuinely appears to be a way to buff out the already paltry running time.

In the lead up to the final reveal, the film-makers offer a couple of loose ends which never get completely covered off, but the ending itself – in spite of knowing that no-one survives – is impressively shocking and surprising enough to stay with you well after the closing credits.

A warning for anyone that suffers from motion sickness, Atrocious will not help your affliction in the slightest. If you are a completist of found footage movies, there are worse examples out there, but there are also better.

Permanent link to this article: https://www.thisishorror.co.uk/see-horror/film-reviews/atrocious-2011/