I have always loved horror in general and was a huge fan of the Pittsburgh channel eleven’s Chiller Theatre. I was either seven or eight when I first watched it and instantly fell in love. When it offered, at Halloween time if I remember correctly, my first real scare with George Romero’s Night of the Living Dead, I became a true horror junkie. But it was the second, The Exorcist, that planted the seed that made me realise that I too wanted to scare people. I didn’t lean toward nor even consider the writing aspect of it, and concentrated on various horrific Halloween costumes in order to get the ‘scare people’ fix I sought. College was where I realised that writing was my calling. Most of my reports and papers leant toward the dark side. Yet I still didn’t pursue it and chose a more traditional route, obtaining an engineering degree and working in this field. When I was laid off during the 2008 economic downturn, I saw it as an opportunity and finally decided to listen to and follow the constantly growing writing itch.

‘And all the Creatures Were Stirring…Even the Mouse’ has received favourable reviews, it is in the Slay Bells Ringing anthology. I am hopeful that Twitch, my novella coming out on July 15, will become that one single piece that makes people want to read me. I am extremely proud of it, it’s my most ambitious piece to date. I have been in Suspense Magazine a few times and have received a lot of feedback for those pieces too. 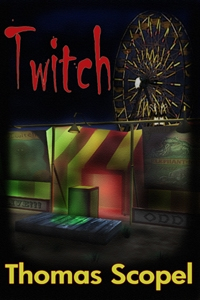 Right now, I have a number of pieces that I hope to finish soon. Another novella, and a variety of short pieces. I’ve also put down a bit more on the novel I have been tinkering with for a while. I took an unplanned hiatus in April, when I struck on an idea for my blog, that I was originally hesitant about, yet did find deliciously morbid and macabre. It’s called ‘The Daily Death’. I wrote a fictional, and usually gruesome, death of one of my actual co-workers. The first was my boss, whom I respect dearly, and was a mutually agreed upon exercise in creative writing. He was a guinea pig. However, never in my darkest dreams would I have expected the response it received. So, I wrote and killed, if you will, a few more of them. That’s when it really took off and each day, when I went to work, I was bombarded with ‘kill me’ or ‘I’m mad at you because you killed them first’ and ‘who died today?’ And, I began getting hits and followers from all around the world. It was so dementedly funny that I had to continue, and simply put all my other stories on hold for the month while I wrote daily death tales. I looked at it as a way to allow me to tighten up as a writer and force me to work under a constant deadline since everyday they would come back expecting more exercises in demise.

Future wise, I am concentrating on promoting Twitch, writing short tales, and adding to my novel, which I hope to have finished by the end of the year.

Without a doubt, Stephen King is the absolute master, and I hope to one day be worthy of walking in his shadow. Joe Hill is a favourite too. Ray Bradbury and Rod Serling are and were writers that had the original ideas I like to think I’m closest to. Jackie Collins I enjoy when I’m in the right mood, and I especially enjoy reading the new up and coming horror anthology unknowns. Both Stephen Jones and Ellen Datlow are the experts and are superb at finding the best of those. I have three large bookshelves, two for books I’ve finished, and one for those I have yet to get to. Of course, that’s besides the stack on my night table.

It depends what type of mood I’m in. Both have their place in horror.

Although I have a novella and am working on a novel, I like to consider myself a short story writer first and foremost. It’s those little ditties, with beginnings that grip and never give up that allow me to maintain a fast pace and never bore the reader. I try to maintain originality and make both the story plot, as well as the character(s) believable, while tossing in a bit of gore and maybe a plot twist or two to keep them guessing. I take into consideration what I personally like to read. Readers can be fickle and I’m no different. If you lose their attention, they are usually gone for good. I never want that to happen with me. When I read, a writer had better latch hold of me quick and keep me. In my case, it’s hard to do. But, if they do that, I’m a fan for life and that’s the type of writer I wanted to be and am.

Well, I haven’t finished Suzanne Collins’ The Hunger Games yet, but I am thoroughly enjoying the read. Otherwise, there are two that I constantly mention when asked. Stephen King’s The Long Walk and World War Z by Max Brooks. Both are tremendous reads that will suck the reader in, never let go, and force you to turn ‘just another page’ again and again and again.

Permanent link to this article: https://www.thisishorror.co.uk/read-horror/meet-the-writer/thomas-scopel/