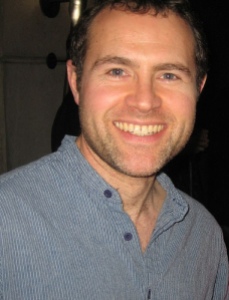 Ever since I can remember, I’ve loved reading scary stories. I devoured ghost and horror story anthologies as a kid. I was automatically attracted to books with monsters or aliens or skeletons on the cover – and I confess, I still am. I remember being terrified by a Doctor Who story called The Abominable Snowmen on the TV when I was four. But the thing is, whereas for some people being terrified by something would turn them off it, for me it had the opposite effect. It was like a drug, and no matter how scared I was – and there were times when I would be so traumatised I could barely move – by the next week I was always itching to go back for more.

So when I started writing my own stories, it seemed natural to write about the things that I loved. I have a healthy scepticism when it comes to the supernatural, but I still find it a delicious and fascinating subject. I would love to believe that there is a whole other layer of reality that we have no understanding of or scientific explanation for. Some people are horrified by that idea, but – although I don’t really believe it – I wholly embrace the possibility that somewhere, somehow, magic and monsters and ghosts might really exist. If they did, think of how much more amazing the world would be. We would be introduced to new sights and experiences every day, to wonders we might never have dreamed of. In the absence of such wonder in reality, we have to rely on movies and books. Which is why I became a fan of horror, fantasy and science-fiction in the first place (though horror in particular – for me the crawling sense of threat and dread adds an extra frisson, which fantasy and SF can’t match) and why I still am. Ultimately horror, as well as tackling very real human issues and fears, provides a feast for the imagination.

It depends what you mean by notable. Probably my best-selling work – not including my tie-in stuff, and in particular my Doctor Who and Torchwood novels, which sell by the truckload – is still my first novel Toady. Because it was over seven hundred pages long, because it was a debut novel, and because it was released in 1989 when the horror genre was booming, my publisher put a huge amount of publicity behind it. There were 24-copy dump bins (remember them?) in every bookshop; there were huge colour display posters of the cover; I was interviewed in numerous magazines and on national radio… the lot. And because of all that, bolstered by some very positive reviews, the book was very visible, and shot straight to number seven on the bestseller list in its first week of release.

However, Toady certainly isn’t my best book. It’s still fun, and it still rattles along quite well, but I wrote it between the ages of twenty two and twenty four, and as such it’s a bit rough and ready, a bit naïve, a bit clunky and unwieldy in parts, a bit undisciplined. I’m a far better writer now than I was then, and although I certainly wouldn’t discourage anyone from reading Toady, I would urge them to be aware of its limitations.

I’ve just delivered both Doctor Who and Torchwood audiobooks to AudioGo (formerly BBC Audio), and am currently working on a short story for a major horror anthology which will be out late next year. When I finish that, within the next couple of weeks, I’ll be launching straight into a novelisation (or rather ‘re-imagining’) of the old Hammer movie Vampire Circus for Hammer/Arrow Books. And once I’ve delivered that in late November I’ll be turning my attention back to the two novels that I’ve had to put on hold for the past six months due to other commissions – one is the first part of what I hope will be a dark fantasy trilogy, depending on whether or not I can find a publisher for it, and the other is a horror novel for teenagers that I’m working on with my good mate, Tim Lebbon. Again Tim and I are hoping that this book will become the first of a series.

Many people. Despite now being (so I’m reliably informed) an established writer in the genre, I’m still very much a fan. Stephen King is probably an obvious choice, but he’s the writer whose work I’ve been reading the longest, ever since I was thirteen or fourteen, in fact, and whose novels I still eagerly look forward to today. I’m also a huge admirer of Ramsey Campbell – he writes the purest and most disturbing horror fiction of anyone I know. There are many other writers whose work I love, and who are too numerous to name here, but I would like to give a special mention to three writers who are relatively new to the genre, and whose work encourages me to believe that the field is still vibrant and in extremely safe hands – and those writers are Adam Nevill, Thomas Fletcher and Rio Youers, all of whose work to date has been exceptional.

I’m not averse to a bit of blood and guts, but I’m far more of a fan of psychological chills. Slasher movies and the like, if done well, are fun and thrilling – a bit like rollercoaster rides – but quieter, more psychological horror gets under your skin and stays there, and is far more likely to prey on your thoughts for a long time afterwards.

I’m not objective enough about my own work to be able to answer that question, but I can only tell you what other people have said about my writing. I’ve been told my greatest strengths lie in creating believable, sympathetic characters and in giving them natural and interesting dialogue to speak. I’ve been told I have a slick, readable and very assured style, and that my stories are imaginative and compelling. I’m told I write scary scenes well and funny scenes well, and that I know how to pace my work in order to, for example, crank up the action or draw out the tension when needs be. I’m also told that I come up with good, original ideas. Is that enough?

Among my favourite genre books are Dark Companions by Ramsey Campbell, Ghost Story by Peter Straub, Something Wicked This Way Comes by Ray Bradbury and Hearts in Atlantis by Stephen King. If I were to recommend one of my own books, I’d probably recommend my short story collection Long Shadows, Nightmare Light, which is just out. Short story collections, I think, are a great way to get to know an author’s work. You get a taste for his ideas, his variety and for the different styles he might adopt. Also the stories in here span the last eighteen years, so it gives a fairly good overview of my career to date.

Permanent link to this article: https://www.thisishorror.co.uk/read-horror/meet-the-writer/mark-morris/