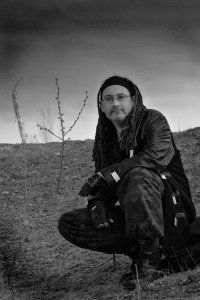 Not a great question to start with, I’m not a fan of horror and I wouldn’t call myself a horror writer. But it’s not what I think about my work that’s important it’s the reader’s opinion that’s key.
I’ve never been drawn to horror as a reader or a viewer. I think because I find very few things scary. That’s not to say I don’t jump at the false scare in a horror movie but very few things creep me out. The exception being zombies. I saw Romero’s Day of the Dead on video in the eighties and that gave me nightmares for years. Romero’s zombies just touch so many raw nerves, the thought of becoming a zombie, being overwhelmed by an unstoppable force, the collapse of civilisation. Zombies had been gnawing their way through my nightmares for years. Then I saw the Dawn of the Dead remake. I’d loved the original and I thought the remake was fantastic. But I didn’t like the running zombies. I can totally understand why they were needed to up the ante, in cinema there’s a horror arms race to go that one step further (look at the whole Torture Porn genre that evolved). But unlike film where you have ninety minutes to scare your audience, I realised that with a novel you can go into more detail and build up that horror and menace of the zombie, and still have the Romero style shambling undead as a believable nemesis.
I guess it was seeing the remake of Dawn of the Dead that made me sit up and think “hey I know a shed load about zombies and I can write a believable zombie novel!”

I think my most notable work is still to come. I’m still learning my craft as a writer (even after 15 years). I feel you have to strive to improve your work so I hope the best work I produce will be way off in the future. My most notable work to date though is the follow up to Domain of the Dead – Remains of the Dead. I have sent out review copies to a number of fellow writers and the feedback I’ve been getting is phenomenal. Remains of the Dead is certainly my best work to date and I’m looking forward to it being published by Permuted Press later this year.

At the moment I have a huge number of projects on the go. I have a Sci-Fi From the Torment of Dreams that just needs a bit of polishing and I’m in the research phase for two novels – if any of your readers pilots a helicopter for a living I’d love to hear from them.

Along with those projects I have some filming and promotional work for the audio version of Domain of the Dead which is being produced by Audible.

Got to be David Moody. I read David’s Autumn series and it just sparked my imagination. I found myself dragged into his novels thinking “what would I do?” David has an amazing ability to write about ordinary people reacting believably to extraordinary events.
David also has a very similar style to me in that he concentrates on the story and the character. Some writers you read and it’s a slog, it feels like they’re being paid by the word and that they have to throw unimportant detail or scenes at you so they can get paid. David’s writing is clear, fast and focused. It holds your attention and your imagination the whole way through.

I think gore can be over played. Too much gore and you switch off to it, but in the right place, in the right amount it can serve to accentuate the psychological chill.

Without the psychological build up, without getting the reader invested in the situation, no amount of gore will frighten. So I think the psychological element is the most important, I mean look at Hitchcock, he reveals very little about the horror, but what flashes he does let us see are all the more powerful for the suspense.

I’d say the accessibility. Here comes the Sciences bit; I worked as a business trainer for 10 year, I’m dyslexic, have a degree in Psychology and I have certifications in Neuro Linguistic programming so I have a very different approach to language than most people and the value of getting information across.

I write with the ease of reading in mind. I want people to power through my writing so I pay great attention to getting concepts and emotions across in a naturalistic way. I’ve had people tell me they’ve read my book cover to cover in a matter of hours. I’ve also had fellow dyslexics tell me they normally struggle to read anything but that they can devour my writing.

The other thing people have told me is how horrific my writing is. I had a fellow author tell me how he physically gagged reading one of my descriptions in Domain of the Dead, I’ve had people tell me they’ve had nightmares after reading my work. I think I’ve been so successful at creeping people out because of the way I write rather than what I’m writing about.

After all shambling zombies have become a bit of a joke in modern cinema but I managed to bring that original Night of the Living Dead fear back to our undead advisory.

Anything by David Moody. Seriously I can’t just name one they’re all great and he only gets better.
If you’re a big zombie fan (and this isn’t just a plug) there is an anthology of zombie stories being published by Wild Wolf in May. 38 different authors have contributed including the likes of John Russo, Wayne Simmons, Remy Porter, Derek Gunn, Joe McKinney, Eric S Brown, A. P. Fuchs, David Dunwoody, Bowie V Ibarra, Tonia Brown, Shaun Jeffrey, myself and a ton more. It looks like it will be one hell of a book for zombie fans.

Permanent link to this article: https://www.thisishorror.co.uk/read-horror/meet-the-writer/iain-mckinnon/