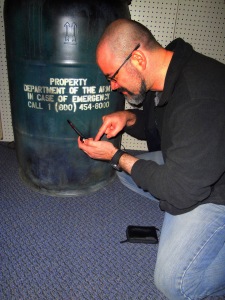 When I was just a whelp, I stumbled across a hardcover copy of Firestarter that my dad had left laying around (hidden deep under his bed actually). And on the back of the dust cover, there was this alarming quote about a fence post going through a man’s throat with a “wet punching sound he never forgot.” I never forgot it either. Then I found his copy of The Shining, and that silver, faceless boy on the front was utterly terrifying, and I didn’t even have the courage to crack it open. But I did carry it around with me for some reason, sort of like a teddy bear. Then I found his whole stash of horror paperbacks tucked away in the garage, among them a novelisation of a terrible film called Blue Sunshine (complete with six pages of “shocking photos!”), Thomas Harris’ Black Sunday, and Robert R. McCammon’s Baal. I would find the nastiest passages and reread them often, amazed at the horrors they were describing, and eventually I felt so dirty I had to return to the stash of pornography that my dad hid in a brown paper bag behind the mirror in the bathroom in order to balance my equilibrium. I realise this sounds like my dad hid a lot of shit around our house. Whoa, I just noticed all those books start with the letter B. Does that mean I only found the B’s, and this was the tip of the iceberg of a vast underground collection of atrocities and I didn’t dig deep enough?! Nah, I doubt it. Or else our whole family wouldn’t have had to reread the same disintegrating copy of The Dead Zone every summer on vacation.

I guess it would be the short story ‘Nine Cops Killed For A Goldfish Cracker’, found in the Comet Press anthology The Death Panel. It was a lucky break getting in there with so many awesome writers, and as a result I received my first actual reviews (like “grimy!”), which was very exciting. And a class at the University of Pittsburgh made the mistake of using it for a course (What’s Inside A Police Officer 101 maybe?), and I find it comes up more often than other short stories I’ve published. It was also one of the fastest and most painless stories I’ve ever birthed, which is indicative of an author’s favourite, or so I hear. However, my new zombie e-book Zee Bee & Bee, which just went up on Amazon, has probably eclipsed it lately since I actually get back a little scratch and therefore instant satisfaction when it sells a copy. But now that I think about it, my story ‘Dewlaps’ in Plot With Guns #10 about a kid killing all varieties of high school coaches was named a Notable Story of 2010 by storySouth, and that has the word notable in it, so there you go. But it’s harder to gauge who actually read that one besides (fingers crossed) any former high school coaches.

Right now I have two projects I’m chipping away at, a novel called Spunkwater about some paramedics who cover up something horrible in the back of their ambulance and the disastrous effects of this on everyone around them, and also a collection of short stories called Fish Bites Cop (the original title of ‘Nine Cops Killed…’) which contains stories dealing with all sorts of gleeful violence against authority figures, mostly police officers, although there are a few security guards, firefighters, and coaches, of course, even a bounty hunters or two chopped up and thrown in the soup for flavour. In fact, it includes a story I had in the amazing Thuglit right before their hiatus called ‘Life Expectancy In A Trunk (Depends On Traffic)’ that was probably the most thinly disguised assault on Dog The Bounty Hunter ever committed to paper. I hope to one day type the words, “I killed Dog the Bounty Hunter and his worthless family before it became the cool thing to do.” But for now, while that abomination still breathes, I’ll have to settle for, “I pretended to kill Dog the Bounty Hunter and then tried unsuccessfully to get him to sign a hard copy of my fantasy instead of his own shitty book two years ago at Barnes N’ Noble” instead.

I guess I’m partial to psychological chills (David Lynch is a prime example of how to generate an almost crippling unease while resorting to Roy Orbison instead of gore), however I’m always excited to discover someone describing a familiar act of violence in a surprising way. If done effectively, one sentence, even one unusual word, can carry more weight than an entire paragraph of clinical blood and guts. A good example is in The Dark Half when Stephen King describes someone’s testicles becoming “untethered” by the swipe of a straight razor. See, I learned a lot from that word. First of all, our testicles are apparently similar to the inside of a golf ball and contain hundreds of rubber bands, or maybe they’re coiled up like a garage door spring. And, secondly, I don’t ever want to be untethered.

Because something will likely happen on the page that will make you say, “He had me there for a minute. Then he went too far.” Or “What did a firefighter ever do to you?” Or “That is not how to correctly make an omelette.”

I wholeheartedly recommend Blood Meridian, a dense, mesmerising western as brutal as any ten horror novels (or three Shakespeare plays), because I’ve been trying to finish it for a decade now, and, hopefully, we can all get through this together.

Permanent link to this article: https://www.thisishorror.co.uk/read-horror/meet-the-writer/david-james-keaton/