I used to read so-called ‘non-fiction’ about UFOs and life after death, but then a friend of mine suggested I read Stephen King. I said I wasn’t into guts and gore horror and he said it was nothing like that. He gave me a tattered copy of The Tommyknockers and it blew me away. I never knew horror could have such scope. It was like a door opening inside my head. 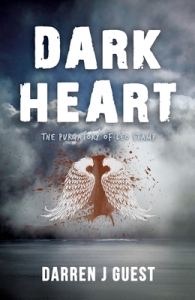 That’s an easy one as I’ve only got my debut novel Dark Heart to shout about. It’s a cerebral horror featuring an angel, a demon and a schizophrenic who talks to a James Bond poster.

A stand-alone novel called Through the Eyes of Douglas. It’s set to the backdrop of the London bombings, but the bulk of the story takes place in a fictional Victorian street that’s been built in the Suffolk countryside.  It’s the most ambitious thing I’ve ever written.

I’m ashamed to say I’m more into the American writers such as King, Koontz and, although he isn’t technically horror, Cormac McCarthy.  McCarthy has had a huge influence on my writing – not stylistically, but the way his characters talk and his readers listen. There’s no crap in between.

I have to say that gore for gore’s sake bores the shit out of me. It’s a cheap tool.  I understand that writing dark material necessitates the need for it, and I’ll use it if I have to, but I think it’s more chilling to be on the other side of the door listening to the knife-wielding psychopath going to work than it is being in the same room and watching it. Gore isn’t scary, it’s icky. It’s the psychopath that’s scary.

I strive to be original above all else, and I’m not interested in putting new twists on tired clichés.  If you happen to read my work you’ll get something new – a well-written something new, hopefully.

I’m going outside my genre here, but I’ve just finished the late Richard Yates’ Revolutionary Road. What a superb book, and a fine example of a writer who knew his material inside out.

Permanent link to this article: https://www.thisishorror.co.uk/read-horror/meet-the-writer/darren-j-guest/