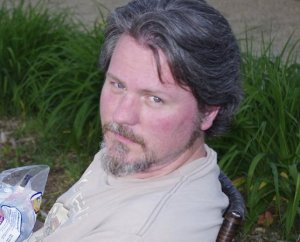 Somewhere between Poe’s ‘The Raven’ and my first attempt at Salem’s Lot the need grew in my belly. When I was young I had horrible nightmares on a regular basis. For a long time I was afraid to watch horror movies. I thought they would scare me. So I became a glutton for anything supernatural, then anything demonic, then true stories – serial killer – and then shock and gore. Now movies don’t do much for me. I still watch and love them, but I think it’s a tough format for horror. Presenting something blatantly leaves little to the imagination, which is where the real fear lies. Books can still grab you and raise the neck hairs.

Notable? I’m not sure anything is notable yet. I think of my three books, Demons and Other Inconveniences is the most read. But I think my best story is either ‘The Wager’ from What Tangled Webs, or something that I haven’t published yet.

I just released The Unauthorized Autobiography of Ethan Jacobs with Hellfire Publishing and it’s doing well.

There’s a book of short stories for kids (most of my work is not).

I’m doing a couple of horror conventions this Summer. Days of the Dead in Indianapolis will be quite tasty! There’s also Scare Camp with Sammy Terry (Indiana’s Legendary Horror Host) and Ari Lehman from the original Friday the 13th. Basically it’s camping, zombie games, all night outdoor horror movies and then special guests from SyFy, A&E, some other writers and artists too – it’s going to be a blast.

I’m involved with the William Castle ‘Angel Island’ project. He’s quite crafty and active for a dead guy. Nicest corpse you’ll ever talk to.

And I’m working on some short films based on a few of my stories with a good friend and some local indie film folks. Busy!

Everyone! The fans are the best. That includes the best of the creative minds, whether they are make-up artists, writers, film makers, musicians – they are all fans of the genre, of the unknown, of the rush that comes from ‘surviving’ a scare. Right at this moment, I’m admiring the group at my new publisher, Hellfire Publishing! They rock – there are a lot of talented people who have gathered to put some quality reading out there.

Gore has its place but it’s not scary. I’ve seen a zillion video nasties and read some gooey books that would make Mr. Stephen King say, “Man, that’s icky.” I tend to be quite descriptive with my own writing, but it’s not the heart of the story. For me, horror needs a supernatural element, or a loss of sanity. Gore can be a consequence, but give me The Ring over Hostel any day. Wow, were those all film references? I’m giving my secret away.

Because it’s fun. I’m trying my best to challenge the typical legends and keep it original. Because my vampires (on the rare occasion I write about them) don’t twinkle.

The Thing at the Foot of the Bed and other Scary Tales by Maria Leach. It’s a great little short story collection for kids. The kind of thing you tell the neighbourhood children at a Halloween party and send them home full of candy and nightmares. The stories are cute, but have a great impact. I haven’t read it since I was probably ten or twelve, but it stuck with me, and the artwork is creepy. I wish I knew the artist’s name as well.

Permanent link to this article: https://www.thisishorror.co.uk/read-horror/meet-the-writer/dan-dillard/