I found my home in horror through my fascination with stories about the end of the world. I’ve read stories about meteors, environmental collapse, triffids, mass blindness, the world slowly dissolving, nanotech, flood and nuclear war. Traditionally, these stories could be found in the science fiction section—Lucifer’s Hammer, for example.

The most exciting instrument of apocalypse for me, however, has always been zombies. And when I say zombies, I define it fairly broadly as ordinary people turned into mindlessly violent things, not necessarily the undead. Hater, Crazies, 28 Days Later, Pontypool—to me, they’re all zombie stories. Zombies are exciting because you have the combination of survival horror involving people who were once your friends, family, neighbours, coupled with the end of the world, which adds a sense of enormous stakes. A story about zombies set on a cruise ship, while the rest of the world goes on as normal—not that interesting to me. Set it on a cruise ship while the survivors learn that it’s happening everywhere, the world is ending—that interests me.

The addition of zombies puts this type of apocalyptic story in the horror category. Unfortunately, for most of my adult years, the horror section was almost exclusively the province of a few select authors like Stephen King and Dean Koontz in addition to almost every type of vampire story imaginable. I honestly used to think it would be impossible to break in as a writer.

Then the digital revolution caught up to fiction publishing, and the game changed. Suddenly, a number of exciting new authors such as David Moody were producing fantastic zombie fiction, and pioneering small presses like Permuted Press were publishing it. The market seemed to open up to me as an author, and I wrote a story I always wanted to read—Tooth and Nail, a realistic, edgy, incredibly violent story about a military unit during the zombie apocalypse. The book has been so popular and the reader community so warm and enthusiastic that I felt like I found a home in apocalyptic horror fiction. And the big publishers have finally caught on that they were missing a major trend, and have begun offering some good zombie books.

That would definitely be Tooth and Nail. It tells the story of a military unit deployed in New York City during the zombie apocalypse. As the military begins to lose control, it retrenches in the south, leaving behind Charlie Company on a mission to escort an important scientist to a rendezvous point. Do they make it? Based on reviews and letters I’ve received, the novel has resonated for several reasons.

Charlie Company is made up mostly of kids who return from Iraq to find their homeland tearing itself apart due to a plague that makes people rabid and compelled to violently spread their disease. There is no single Rambo-like hero; the book has an ensemble cast, and they’re all young and scared and wondering if their families are okay. They question orders to shoot American citizens who are infected. The infected scare the crap out of them. They interact realistically with their environment: guns run out of ammo and not just when required by the plot. Smoke obscures their visibility. They puke at the sight of gore. They plan their military operations. They use protocol when they talk by radio. The story is believable. So believable, in fact, that soldiers’ reading the book have mistaken me for a veteran, which was the most gratifying feedback about the novel I’ve gotten to date.

With their hi-tech weaponry and training, the soldiers seem to have all the advantages, but the infected have the numbers and do not understand fear; they are fighting a total war not for land or resources or religion, but for dominance of one form of life over another. Charlie Company’s cause is almost hopeless, and yet they continue to fight for a country that may no longer exist. That is an idea that is stirring to the spirit as well as the intellect. While most people are focusing on themselves, trying to stay alive day to day, the soldiers do their duty and make incredible sacrifices as the odds stack up against their survival.

Finally, the book delivers non-stop, incredibly violent action for most of its some 250 pages. The reader will join a bayonet charge during a night operation, clear a building, reconnoiter a devastated neighbourhood, make a stand against the hordes of infected. 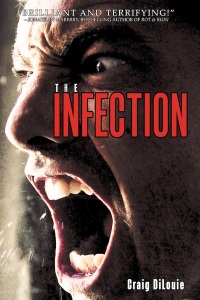 My latest novel, The Infection, was recently released by Permuted Press and is already generating fantastic sales. It’s set in a different universe than Tooth and Nail, and distinguishes itself in several important ways.

The novel focuses on five people trying to survive during the apocalypse. While it delivers similar action levels as Tooth and Nail, it is a much more character-driven story. The people who inhabit The Infection are damaged people, reeling from the shock of the familiar suddenly becoming a dangerous and violent. The shock at seeing the people you love turn against you. The shock of losing everything. The apocalypse is a horrible place in The Infection. It’s a story about what people have to do to survive, and how that changes you because survival has a price.

I also included an interesting innovation in the novel in the form of mutated creatures that pose an elevated level of threat. These monsters, whose origins are suggested but not fully explained just like the Infection itself, take what is basically a zombie story to a whole new level of horror.

Right now I’m working on a sequel to The Infection, which Permuted will release either at the end of 2011 or early 2012.

One author I admire is Stephen King for how prolific he is. I write pretty fast, but his pace of production of quality work is incredible. Another author is David Moody, the “local boy who made good” in horror; he went from struggling self-published writer to a widely known  author with hardcover publication and distribution by major publishers, with movie and foreign rights sold. He inspired many, including myself, to start writing in this genre. He’s also a hell of a nice guy.

Who else? Jeff Long, for sure. His The Descent and Deeper are simply incredible—brilliantly innovative, imaginative and genuinely scary, not to mention very well written by almost every metric—character, plot, setting and so on. Another is Jeff Carlson, a science fiction author who wrote a fantastic apocalyptic series: Plague Year, Plague War and Plague Zone. The books are realistic, grueling and leave you breathless, and each sequel is as good if not better than the original.

There are many other terrific authors that I admire. I read almost constantly, as I learn more about the craft from almost every book I read.

I’m not into gross-outs. Gore has its place, but should be handled tastefully. A good horror story should be about people you care about with some gore, not a story about gore with some people, unless you’re going for comedic effect. For me, psychological chills are the soul of horror. Take a step back for a moment and consider how incredible it is that somebody can write words that make somebody else’s heart beat faster with genuine tension and fear. That is true horror.

Tooth and Nail and The Infection have both received numerous positive reviews from readers, authors, websites and magazines.

How about 19 books? Here are some of my favourite works of apocalyptic fiction: Craig DiLouie’s Favourite Apocalyptic Fiction. I’d also recommend The Descent by Jeff Long if you haven’t read it yet. It’s simply one of the best, one of those rare books you’ll read once a year.

Permanent link to this article: https://www.thisishorror.co.uk/read-horror/meet-the-writer/craig-dilouie/