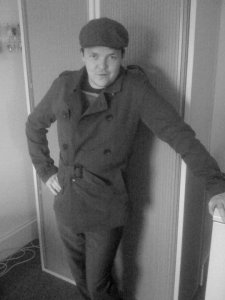 I guess wandering around as a child and being allowed to watch as many horror films as possible instilled in me a love of horror. My brother would bring home films like Return of the Living Dead, The Wicker Man, Nightmare on Elm Street, et al and we’d watch one after another. He also bought me tons of books which I devoured. I guess growing up gay in such a small place inevitably led me to outsider fiction – Darcey Steinke, Laura Albert, Harry Crews, Amra Brooks, Scott Heim, Poppy Z Brite, Matthew Stokoe, Helen Walsh, Laura Hird and of course horror, noir and hardboiled.

I always wrote as a child but put down the pen for a while before picking it back up again when I studied journalism. The one novel that resonates with me, the first one I remember really getting me down to the bone was Mary Shelley’s Frankenstein. I think it is still my favourite book. It made me want to be a writer! Well that and Elvira!

I’m most proud of reading and championing new writers in horror and noir fiction. Having a novella published with Pulp Press. Quite a bit of my journalism work, meeting and making friend’s with fantastic people.  It is so hard for writers nowadays and making money from writing is next to impossible unless you’re JK Rowling! It’s a big bad bag of ferrets, is the writing game.

What I am working on now is a noir novel with quite a bit of supernatural realism. I’ve had a bitch of a time with it and been banging my head against the wall with frustration for well over a year! I think I finally know what I am doing and where to go but the path gets fuzzy and I lose my way (Gawd, I sound pretentious)

If it sprinkles your pinkie you can take a peek right here, right now.

If it is done right I like most subgenres. Home invasion, ghosts, rape-revenge, monster fare, classic, pulp, grindhouse, SF et al. I do think many writers and filmmakers have a tendency to rely a little too much on shock tactics i.e. A Serbian Film, The Human Centipede. I love the writing of Allyson Bird and her work is atmospheric, heartbreaking and still packs a mean punch, whilst Conrad Williams The Unblemished is probably one of the greatest body-horror novels in literature while still being complex, intelligent with so many wonderful squelchy moments.

I’ve been told much of my fiction focuses on feelings of isolation, self-harm, abuse and alienation. One thing which bothers me about genre fiction is the absence of characters that are relatable to me in genre fiction. But I’m dreadfully self-absorbed and never pleased anyway.

Don’t get me wrong, the last thing I wanna do is put my ass up on a soapbox and bore people with treacly sanctimonious BS.  I want to tell a good story and make people laugh while at the same time have them shit their pantyhose with terror, but I’d also like my writing to reach people in a way that makes them feel a wee bit better about themselves. But I’d still be pleased to see them shit with fear.

Or here is the short answer: I’m really poor and could do with the cash so just buy my book. You don’t even have to read it, you can beat off to it if you like.

The Leaping by Tom Fletcher where everyday is a dark night of the soul….

Permanent link to this article: https://www.thisishorror.co.uk/read-horror/meet-the-writer/alan-kelly/