Those of you that have been to Runcorn or have seen an episode of the terrible BBC sitcom Two Pints of Lager and a Packet of Crisps will know that Runcorn’s bleak town centre is the perfect setting for a night of occult horror. The Twisted Tales event was staged at Halton Lea Library on 27 October and featured appearances from Ramsey Campbell and Adam Nevill.

The event began with an ambient showing of the 1922 classic Nosferatu as the punters began to pile in, it made for effective viewing and distracted a few patrons from the free brews on offer.

Proceedings began slightly anticlimactically with the announcement that scouse author and comics guru John Reppion would not be able to attend. However it only took a glance at the remaining guests to become immediately excited about the prospect of what lay ahead.

After a brief and spirited introduction from David McWilliam of Twisted Tales, Adam Nevill began the night of occult horror with a reading from his fantastic novel The Ritual. Adam read in a patient and well-paced manner from a passage towards the end of the book. Without wanting to give too much away to those who haven’t read The Ritual, the passage focussed on a small dwelling in the middle of a Scandinavian forest where the reader is given the first disgusting glance of the true nature of events that have been happening up to that point. The passage was tense and horrifying whilst ultimately nailing the occult theme of the evening. 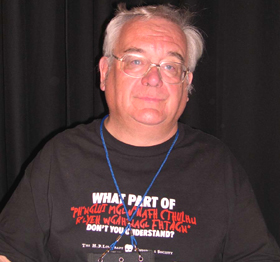 The reading kept the audience of around forty pilgrims enraptured from start to finish and was an excellent way to start the event. The next reader was horror legend Ramsey Campbell who read a passage from his book The Grin of the Dark. Whilst Ramsey’s extract was not as bleak as Adam’s, his selection built slowly towards a creepy conclusion and was greeted very enthusiastically by the crowd.

After a short break the panel reconvened and after a brief section of chat from David and Glyn of Twisted Tales, the two scribes were quizzed on their influences and approaches towards writing horror and the occult in particular. Both advised the crowd on the importance of the suggestion of the occult rather than attempting to explain it.

Twisted Tales provided an informative and thoroughly entertaining night of occult horror at Runcorn library, being able to hear Ramsey Campbell deliver a reading being a personal highlight.

Permanent link to this article: https://www.thisishorror.co.uk/read-horror/event-reviews/twisted-tales-adam-nevill-and-ramsey-campbell/