Writers: Let your work define you

Okay, I will throw my hands up and admit that yes, I am actually a grumpy old curmudgeon after all, and it appears that I wear that skin quite well. This column is going to be no exception – so what’s got me fizzing this time, you may well ask? It’s simply this:

A. N. Other – Horror/Fantasy/Whatever Author at the head of someone’s social networking profile.

Ever since Nickolas Cook of The Black Glove webzine wrote an editorial about it, I’ve come to notice this particular annoyance more and more – those authors who tag themselves with a qualifying statement like the one above. I see it mostly on Facebook from aspiring writers and also, very occasionally, on other sites (personal websites, however, don’t bother me so much – after all, they exist to promote the author’s work). For some inexplicable reason, it just bugs the crap out of me when I see it.

Okay, I understand the need to offer potential readers some kind of guide and job description, a means by which lovers of whatever genre can hone in on the stories they like. What bothers me is that such writers appear to feel some kind of need to distinguish themselves from others, almost as if they’re shouting “Me! Me! Look at me!! I’m a horror author, not a fantasy, science fiction or paranormal romance author – I write horror!” You very rarely see any other kind of author tagging themselves in a similar manner. I can’t imagine seeing, for instance, ROBERT LUDLUM – THRILLER WRITER or DANIELLE STEEL – ROMANTIC FICTION AUTHOR. Yes, these authors have already made the grade in their particular fields and so don’t need to distinguish themselves. But can you imagine every person on Facebook appending things like FUNERAL DIRECTOR, TEACHER, LAB ASSISTANT or TAX COLLECTOR after their name? It’s unnecessary in my book, as well as irritating, and only smacks of desperately needing to be noticed.

The fact is, it is, ultimately, your work that needs to be noticed, not you. For me, I couldn’t give a monkey’s left testicle whether you’re a horror, fantasy, science fiction or whatever writer – your public profile on whichever social networking platform should mention what you do in the ‘About me’ or ‘Occupation’ sections. Plus on the omnipresent Facebook there’s already a function where your occupation shows up under your name or at the top of your profile. If someone sends me a friend request, I always look in the ‘Info’ bit automatically, just to see what they’re up to or why they sent me a request in the first place. I don’t want it screamed at me (and neither do countless others, I would think) in the profile name that they work as an Insurance Clerk at a major Underwriter’s somewhere – I can find that out elsewhere on their page. Similarly, I can find out that someone writes in their spare time in the relevant bits of their profile, and I can glean what kind of material they write by the list of their favourite authors, or I can click a link to their personal website if they’ve provided one. So, if you are a writer, I will notice that one way or the other – and neither do you need to make a special emphasis on what type of fiction you write, let the work or your public profile do that for you. 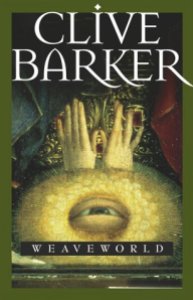 Extending this ever so slightly, what does it even mean to say horror writer, anyway? The genre is no longer as rigidly defined as it used to be – witness for example Gary McMahon’s Pretty Little Dead Things. It’s ostensibly a horror novel, yet people have reported it being found in the crime section of a bookstore. So much of genre fiction these days borrows elements from other types, that it’s no longer possible to strictly shoe-horn a genre book into a single category. Clive Barker’s Weaveworld, for instance, can easily be classified as horror, science fiction, urban fantasy or even epic fantasy (in a loose sense admittedly). This cross-genre pollination is not only a development to be welcomed by readers and fans, it’s an absolute necessity if genre fiction is to evolve beyond its self-prescribed limits and boundaries. To strictly define oneself by stating that you’re a horror or fantasy writer is automatically limiting yourself and excluding potential readers, even if you predominantly work within a single category of fiction. So I think it’s highly redundant – I know that I have been put off seeing someone describe themselves as a such-and-such author because I don’t normally read within that genre, whereas it may be that I will be pleasantly surprised if I do read some of their work. At the very least, leaving it out may be a good way of starting up a conversation, as it’ll make some want to know what type of writing you do – a subtle way of engaging people to generate interest, perhaps.

So come on, aspiring authors – stop tagging yourselves as particular types of writers, or even limiting yourself by stating that you work within a particular genre. There’s no need for it, plus to someone like me, who spends a great deal of time working with authors, it just sends out the wrong signals. There’s something faintly desperate and juvenile about it, like some teen making sure that everyone knows that they like alternative or goth music instead of the mainstream. If you want people to know what kind of books and stories you write, direct them either to a personal website or wherever your book(s) are being sold. Or set up a page on Facebook where people can look at what you’re currently involved in. That’s what I’ve done with the Spectral stuff, and whenever I blog about something I just cross-post it to my personal profile. In other words, I am Simon Marshall-Jones the person, and also Simon Marshall-Jones the editor and publisher – and I try to keep the two separate.

Permanent link to this article: https://www.thisishorror.co.uk/columns/read-letter-day/writers-let-your-work-define-you/