Regular readers of this column will no doubt think I’m some species of curmudgeonly cuss, and I’m afraid the present edition of my column isn’t going to dispel that notion (I’m a nice guy, really). Anyway, today I’m going to talk about something which really irks me: the Hollywood habit of remaking successful foreign films.

The latest to get the ‘all-star’ make-over treatment, courtesy of Chris Columbus’ 1492 Films, will be André Øvredal’s smash-hit Troll Hunter (2010). My question is: why does Hollywood feel it necessary to remake such films? Are film producers over there so contemptuous of their audiences that they feel they have to make it culturally familiar in order for them to understand it? Or do they genuinely believe that they can make it better than the original?

To a large extent I can fully understand the motivation to remake when it comes to Japanese/Chinese/Korean films – their cultures are very different to those of the West, and it does take a lot to adjust to seeing the world through their eyes. Even so, I would argue that the majority of Eastern films contain enough plot and momentum of their own to get past those supposed cultural barriers, unless said film is so out there that even the film-maker’s own countrymen have difficulty in following what’s going on (and with some of the weirder ‘experiments’ in Japanese cinema I can well believe that this is the case). Granted I’ve been watching Eastern celluloid oddity and anime for many decades now, so I have some knowledge when it comes to oriental cultural references – however, despite that, I can honestly say that most of the horror films from Japan that I’ve seen are fairly self-explanatory.

European films should be even less of a problem, since much of the culture of the US is ultimately derived from there, albeit having then evolved and shaped to fit local needs over the subsequent centuries. Certainly I would have thought that there would be more commonality between Europe and the US in the cultural arena. My only conclusion, then, is either that the Hollywood Movie Machine doesn’t trust cinemagoers to work things out for themselves or they believe that they can improve upon the original. 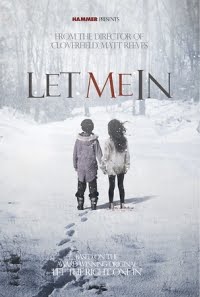 The track record of such films often tells its own story, and it’s not that good (although I also recognise that there have been those remakes which can stand up to the original– Let the Right One In is a case in point – but I would wager that they’re the exceptions that prove the rule).  I remember watching Hideo Nakata’s Dark Water (2002) and being genuinely creeped out by it – the atmosphere was taut, unsettling and disorientating in the extreme. Much later I watched the 2005 remake by Walter Salles, starring Jennifer Connelly, which, although quite chilling and atmospheric in its own way, just didn’t quite hit the same level as the original. Even those directors of the originals – who have been lured to Hollywood in order to revisit their creations by the promise of bigger budgets and access to the best SFX houses – very often fail to make the grade. Just because a director has greater or better resources at hand doesn’t necessarily mean that the product will be better – in fact I would posit that very often the opposite brings out the ingenious best from directors.

“Is it absolutely necessary to have to remake a popular Korean film? Why can’t it just be left to audiences to make up their own minds?”

I often wonder, too, how the original director feels about his work being ‘remade’ – in my view it would be the equivalent of asking Jane Austen to rewrite one of her novels by ‘bringing it more in line with the current times’, by introducing references to drug abuse, dubious sexual practises, or staging gunfights between the protagonists resulting in epic bloodshed. Yes, sensibilities and mores are very different from what they were then, but that still doesn’t qualify as an excuse (and don’t get me started on literary ‘mashups’ – but that’s for another column, perhaps). The same, I feel, applies to current films being remade just because they’re from a different country – perhaps money speaks more here than any other consideration but, if it were me, I’d feel insulted that a film I’d directed, which had achieved more than a modicum of success on its own merits, was just about to be remade to suit the ‘tastes’ of another country. Plus, like I intimated above, it also appears to insult the intelligence of the American film-going public, as if what producers are saying is that US audiences aren’t savvy enough to work out what’s going on and that the film being ‘foreign’ is some kind of an obstacle. Okay, so some people don’t like subtitles as they find it difficult to read what’s being said and follow the action simultaneously, which I can understand to a certain degree – but the solution is to make a dubbed version for those who don’t like them (I’m the opposite – I hate dubbed films and it has to be subtitled every time).

I just wish they’d leave things alone – is it absolutely necessary to have to remake a popular European or Japanese/Chinese/Korean film. Why can’t it just be left to audiences to make up their own minds? Granted, I don’t get to see as many films these days as I would like, but as far as I’m concerned I will always opt for the original over the remake. I will, however, admit to a certain curiosity concerning a comparison between any two versions of the same film, just to see if the remake comes close to or even supersedes the original, but more often than not whenever I do I come away disappointed. I’m quite sure that there are other scripts doing the rounds out there that deserve to be made as opposed to a studio ploughing money into a remake of something that already exists – although the paucity of imagination currently afflicting Hollywood, and the consequent aversion to taking risks on new talent, bodes ill for any prospect of changing the modus operandi any time soon.

I am just one miniscule voice in what appears to be a wilderness; however, my plea still goes out to those who should know better – STOP MAKING SECOND-RATE REMAKES OF FILMS THAT DON’T NEED TO BE REMADE!

Permanent link to this article: https://www.thisishorror.co.uk/columns/read-letter-day/hollywood-stop-remaking-films/