Return to Horror of Babylon

Why are youngsters shying away from books?

Recently, it was pointed out that this instalment of Horror of Babylon marks six months of my column with Read Horror. It’s been a blast to be onboard from the very beginning and to be able to watch Michael Wilson’s vision spread like the fog over Antonio Bay. To mark this milestone of sorts, I gave some thought to November’s topic. Art is such a subjective thing, I try to steer clear of how-to type pieces. Who am I to tell you how to make your shit, anyway? Want advice? Just go do it. These folks’ll love it, those folks’ll hate it, and together they make up an audience. Your audience. Enjoy! It’s the bunch who shrug, who bring nothing to the table, who shuffle back to the blandness of their day, the ones who offer only the silence that rings in their own heads, who don’t respond strongly to anything, you gotta watch out for. Vehemence scares these types, comprehension eludes them, they’re not who you’re after. You want the searchers, the opinionated, the possessed. Kerouac called ’em roman candles and he was right. Passion, pro or con, is never a bad thing.

As I pondered what to unleash in this round, I realised one of the most horrifying things I’ve ever encountered has been staring me in the face for a few weeks now. So let’s go there, shall we? Let me preface by saying, I’m American. Born in the east, bred in the west, and known to criss-cross. If you’re not careful, I might pop up in your town next. I’m serious. No matter how remote (Hola, Blanco TX!), if I get the itch, we could be neighbours. And you’d fucking well better keep it down, because I don’t like noise. Music, dogs, chickens, rugrats, engines, doesn’t matter. If I can hear you, you’re too fucking loud and we’ve got a problem. If you’ve ever shared a wall with me, you know what I’m talking about and probably didn’t emerge unscathed. Thankfully, I stopped sharing walls years ago. Free-standing domiciles, neighbours at a wide berth only for me, thanks. I’m a cranky American then. So be it. Lotta white in this beard these days, too. Hell I’m downright crotchety, fuck you very much. Blame the Swedes, I have Viking blood. I’ll also tell you most stereotypes exist for a reason. When you see caricatures of obese, sloppy, garish, loud-mouthed, ignorant Americans, it’s essentially because the nation is wracked with artery-clogging imitation McFood, lowest common denominator television (but does any country run smart TV?), clock-punching teachers representing an educational system in alarming decline, brazen corporately owned politics, and if you need more examples, I’ve got one word for you: TapOut. Or is that two? Who gives a shit. Point is, we’re at a low here, but all’s not lost…yet.

There is a front line and it’s fighting hard, as evidenced by the Occupy Wall Street movement (which sadly, it seems, will devolve into occupying just about anything where hipsters in pin-leg jeans can goad mace-toting lunkheads into spraying them for fifteen minutes of Facebook video fame). How easily we lose focus in the 21st century. I hear Occupy GameStop is going down next Monday at midnight, sponsored by Xbox. Grab your signs and queue up now. After all, here in America it ain’t real revolution until it’s got a corporate daddy’s ok. That’ll be $43.74 for your rebellion, after tax. Thanks for marching, have a nice day. Good God Almighty, we’re fucked. And the scariest thing is that the empire’s rotting from within, as they all do sooner or later. Yeah, well. Que sera, sera. Environmental destruction, an encroaching worldwide police state, delusional religious agenda in government and the private sector, while mortifying all, are not the triggers that have struck fear in my iron-clad heart, nope. It’s far simpler than all that: motherfuckers have stopped reading.

Some months ago, an epiphany led me to dump the movies. It had been a long time coming. In retrospect, filmmaking stopped being fun for me around ’05-ish, ironically around the time my stuff started popping up on peoples’ radar. I continued to call myself a movie guy first and foremost, but studying it, I can see that jumping in a van to play rock n’ roll around the southwest was escape attempt number one. The band was largely ignored, but we made our gas money and got enough stories to, well, write a book. Maybe someday. On the film side, I made some things I’m super proud of, got some good press (and to those who tried to disparage, all press is good press, assholes), travelled a lot, met some great (and some really shitty) industry people, but you can only hide not giving a damn for so long. Hollywood, I just fell out of love with you, baby. I guess you can never say never, but for now we’ll say cut. Funnily enough, it was an on-set conversation with Maggie Gyllenhaal that kick-started this latest chapter for me. We were sweating our asses off in an elementary school auditorium for a director who, while nice enough, didn’t know what he wanted. Neither did the crew. In fact, nobody seemed to give a rat’s ass at that point, they were just collecting cheques, a familiar scenario in the big budget end of the pool. Lots of trumpeting, little artistry. Anyway, the topic of where we’d rather be came up, as I literally blew Maggie’s skirt up (I was her personal air conditioning handler, true). I blurted that I saw myself running a bookshop. My first novel was set to be published that summer and I guess it had been on my mind. As if by invocation, the opportunity presented itself soon after wrapping my duties keeping Mags cool, and I rejoined the ‘workforce’ after several years in the clouds. 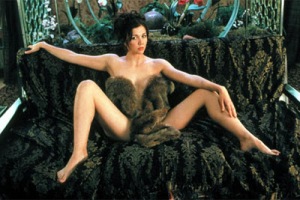 It’s been a total one-eighty degree, a fuckin’ joy. Except for that one alarming syndrome, that true horror. The kids aren’t reading. Worse yet, they seem embarrassed to be caught in the vicinity of books. Not all kids, mind you, only like seventy five percent of most American boys and girls under twenty five. It may very well be symptomatic of the area in which we operate (we’re not far from the city proper, but just far enough into the boondocks that some grown adults actually write ‘would of’ in place of ‘would have’ and think it’s correct usage). News flash, geniuses: if English is your native language, you really gotta have that shit down by the time you receive those diplomas. God in fucking heaven, if you existed, I’d beg you to save us from the coming generations. But you don’t, so I’ll just pop on some XTC and wrap this ditty up with a recent story. Girl enters my shop with a skulking boyfriend, both of ’em maybe fifteen. She’s bright-eyed and bushy-tailed (stop undressing her with your mind, you pervs, she’s not legal), he’s a flickering bulb. As she buys a book, his friends spot them at the counter and begin heckling from outside, prompting the kid to throw up his arms and exclaim, “What?! I’m not reading! I don’t read!” He then turns to my staff, red-faced, and offers the sage gem, “I’ve never even been in a bookstore, I swear!” No shit, Sherlock. Safe to say we called that one the second you walked in with your sideways ballcap, kid. Functioning illiteracy gets the chicks, I guess, though probably not for long. I was even compelled to interject and confirm with the sheepish girl that she could, in fact, read. She could. And there lies one hope for the future, at least. Maybe all’s not lost. Eh, probably still fucked, but I’d play those odds. I’m an optimist. I wouldn’t of it any other way.

This month’s dedicated to Steve Patronas, who in his day loved the pulp fiction and could down a beer and kick some ass with the best of ’em. Toast to ya, old man.

Permanent link to this article: https://www.thisishorror.co.uk/columns/horror-of-babylon/why-are-youngsters-shying-away-from-books/