Return to Horror of Babylon

Who took the horror out of horror?

Charts and graphs. Demographics and polls. All very nice for bean-counting and product placement, but at the beginning and end of the day, it’s the artists who create and help shape this regal beast we call horror. I don’t know this for certain, but somehow I doubt Poe skewed toward the 18-34 male market as he was honing his craft, nor did he envision which hot duo would ideally portray Roderick and Madeline in a House of Usher film adaptation. No, he probably just closed the door on this universe and went to that one, reporting back to us with his dark findings in the form of a timeless classic. Christ, is it even possible for a Poe to emerge untainted in today’s commercially co-opted world? Don’t ponder that question too extensively or visions of Michael Bay will dance in your nightmares. Or is it a cardboard cut-out of Michael Bay? Is there a difference? The mind boggles. Where were we? Oh, right. Can an artist as prolific, visionary – revolutionary, even – as Poe emerge from our cesspool of 21st century plasticity? I like to believe so. Like a hot knife through butter. Throughout history, the shell game’s never been able to chump the real deals. But the writer in question will need some serious tunnel vision to navigate all the catnip, flashy baubles, and BS that litters the path. Luckily, scribes are kinda known for going down the rabbit hole and getting lost in worlds of their own making. Until it’s time to resurface, hopefully intact and of sound mind, preferably with a manuscript that’ll turn some heads and slap some food on the table. Pay some bills. Fill some mugs. Load some syringes. Y’know, whatever keeps that particular ship sailing until it’s time to pull into port. Everyone has their thing, good or bad. If the work delivers, who are we to begrudge? Art imitates life imitates art, ad infinitum. Or does it? Where exactly are today’s artists and craftsmen coming from? When even indies – traditionally the training ground for all that is brave, new, wild and undefined – won’t dare break out of the bubble for fear of sacrificing a buck, things have gone badly astray and need to be set right. 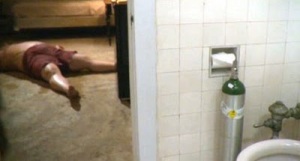 I made New Terminal Hotel back in ’08 and it’s not a horror film at all, it’s film noir that takes the step to horror in its final moments. We snuck in the back door with a horror-centric cast, and while it took a couple years, the film found its audience through process of elimination. They’re a devoted bunch of lunatics. Not every critic appreciated the approach, but NTH definitely coloured outside the lines. Point is, no company pulled our strings. We believed in the material and committed to standing by it, fly or fall. It’s an ethos I don’t see very much of lately. In an era where business has swallowed art, where imitating has replaced initiating, where remaking (or nauseatingly, re-imagining) has ko’d creating, where do the throwbacks, the visionaries, the last free men and women hang their hats? Not on the fucking Pet Sematary remake, I’ll tell you that. Not on any remakes. They’re too busy chopping through the brush, slicing through the bullshit, seeking the higher ground, and they don’t give one hot damn about which interchangeable, corporate-friendly director landed which high-paying paint-by-the-numbers gig to copy some film that copied some book that was just fine the first time around and not that long ago, to boot. By and large, creative development executives (especially in Hollywood) should do the planet a great service and kill themselves, post haste. Even the job title trips the gag reflex. Creative development executive. Say that three times fast. If you finish without projectile vomiting, you’re either forged of steel and immune to toxicity, or are one of them. If A, cheers to you. If B, kill yourself. I’m totally serious. You’re bastardising and vandalising two amazing art forms (film and books) and specifically laying ruin to the oldest storytelling genre in recorded history (horror/suspense). Your mother sucks cocks in hell. If C, you don’t know that reference, you’ve revealed yourself as an interloper and shouldn’t be reading this. Kill yourself.

When everything we know and love about the genre in all its forms is being stripped and plundered by buttoned-down talking heads and aspiring corporate yes-men disguised as creators, it’s time to release the hounds. Straight talk only here. And lest I be misinterpreted, this has nothing to do with the Twilight series, books nor films. No, I haven’t read Meyer’s work and won’t, because I’m not who she writes for, but I’ll tell you a dirty secret: I’ve seen all those films on the big screen and wasn’t offended at all. I knew what I was getting into and they’re perfectly entertaining for what they are. For all you die-hard fangites out there, Robert fucking Pattinson can sparkle ‘til his heart’s content and never infringe on the memory of Christopher Lee’s Dracula. Get over it. Besides, if we want to get literal, one big part of the wampyr’s m.o. is to come on as a friend, lover, or non-threatening boy/girl-next-door. If I were undead, it’d be a smorgasbord right about now. Every nubile teen the world over longing for her very own vampire in sparkly armour? Oh, hell yes. Meet me at Hot Topic in an hour, girl. I’ll be the shiny dude over by the piercings. Let’s take a walk…

Permanent link to this article: https://www.thisishorror.co.uk/columns/horror-of-babylon/who-took-the-horror-out-of-horror/